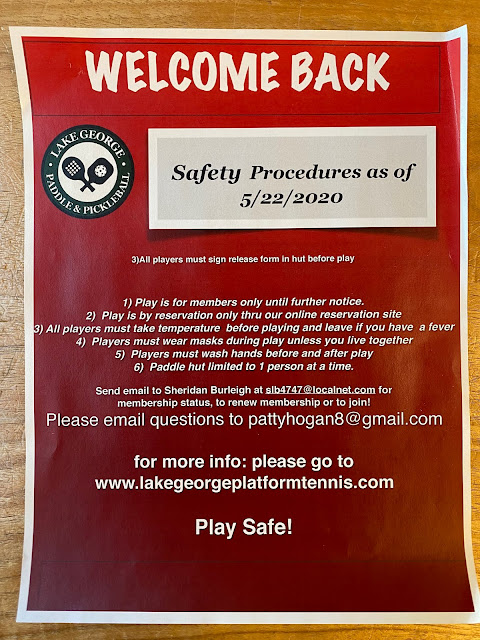 From the Lake George Mirror

By Anthony F. Hall
Saturday, August 2, 2014
+
The introduction of platform tennis to northern Lake George will be celebrated on Saturday, July 12th, when Northern Lake George Paddle’s courts will formally open with a ribbon cutting ceremony at 9 am.
The two courts and a viewing deck, a warming hut and bathroom are located on Route 9N, north of Hague and adjacent to Eddie’s Restaurant.
The ribbon cutting ceremony, which will be attended by New York State Senator Betty Little and local officials, will be followed by refreshments and opportunities to play the only outdoor year-round racquet sport in North America. The hosts will provide the necessary equipment.
According to Patty Hogan, the courts will be home to a comprehensive program of memberships, leagues, lessons, tournaments and “Platform for Life,” a local initiative launched last year by Hogan and Andrea McDonald to help young people acquire life and work skills.

Dan & Barb Bianco, Mary Faith Sinnott, Sally Hayes, Jamie Hayes. Photos courtesy of Andrea McDonald
“Our belief is that the right choices you learn to make on the court will help teach you to make the right choices in life,” said Hogan, a former Platform Tennis National Champion who was inducted into the sport’s Hall of Fame in 2005.
Hogan is married to Ticonderoga native Sandy Morhouse, and the Morhouses and Hague’s Jane and Paul Ingrey led the effort to establish Northern Lake George Paddle.
“We all love ‘paddle’ as the sport is known among those who play platform tennis, and we wanted to bring the sport to the area and to get kids and the whole population out there as much as possible, so we began to explore our options,” said Hogan.
“We formed a partnership with the Ticonderoga Revitalization Alliance, whose not-for-profit status will enable us to collect tax deductible donations for local youth programs, including Platform for Life and the opportunities it presents for giving kids access to the courts,” said Hogan.
The costs of outfitting the Northern Lake George Paddle with a warming hut, viewing deck and restrooms were reduced through discounted materials and donated labor, said Hogan.
“Scott Hearburg, who owns the McDonalds restaurants in Ticonderoga and Warrensburg, Rick Bartlett and Doug Ross, organized what we call ‘a community build,’ because when a community builds something, it’s also a community that’s being built,” said Hogan.
The costs of building the courts themselves were defrayed in part by a $10,000 donation from the American Platform Tennis Association, but the largest share of the burden was shouldered by the partners in Northern Lake George Paddle LLC, led by the Morhouses, the Ingreys and Eddie’s Restaurant owner Dave Iuliano, who leased property to Northern Lake George Paddle for the nominal sum of $1 a year.
The partners will donate all profits to local youth programs.
Children will have permanent, free access to the courts. Teenagers can earn free access in return for devoting time to the community as a volunteer.

Everyone will have free access throughout July and August. Anyone interested in using the courts between 10 am and 5 pm can register at the Ticonderoga Country Club’s pro shop, where paddles will be available as of July 1.  After 5 pm, paddlers can register at the courts and borrow equipment from Eddie’s Restaurant.
Memberships will be available for $175 a year for an individual and $225 for a family, making Northern Lake George Paddle one of the least expensive platform tennis facilities in the United States, said Hogan.
Hogan envisions Northern Lake George Paddle’s courts as a destination for tournaments and clinics that will also benefit local resorts and restaurants.
“Stay and Play,” quips Hogan.
But, she added, the partners want the courts to be accessible to everyone to exercise and develop healthy lifestyles, which is one reason why Northern Lake George Paddle will also offer its own version of pickle ball, a popular and relatively easy sport that combines elements of badminton, tennis and ping pong.